The modular Extinguishing Control Panels Series BC600/LC600 are extensively upgraded Fire Detection Control Panels Series BC600 with a huge number of additional functions for controlling extinguishing systems. They meet all mandatory requirements as well as all options of EN 12094-1 and have been certified by VdS for numerous extinguishing agents. The product family has already been launched in 2019 and is fully available. Extensive documentation on installation, parameterisation and operation is available for the installer and for the user of the system.

The Series BC600/LC600 comprises various types of control panels, which differ, among other
things, in terms of housing version and expandability.

The compact Fire/Extinguishing Control Panels BC600-1L/LTF and BC600-1D are intended for the actuation and monitoring of one flooding zone according to EN 12094-1. Since the vast majority of extinguishing systems are single-zone systems, this control panel version is ideally suited for this application.
The control panel also allows connection of existing conventional detectors from various manufacturers.

The main advantages at a glance:

All relevant function modules Series BC600 are available with integrated redundant processor if required. In this way, the failure safety required by the standards when actuating more than one flooding zone is achieved.

Current user manuals are available for the Extinguishing Control Panel Series BC600/LC600, which cover operation, construction, installation, connection, commissioning and parameterisation. The user manuals provide both the user of the extinguishing system and the
installer with detailed and specific information.

The integrated online help of the Parameter Setup Software PARSOFT has also been expanded to include all specific windows, parameters and setup options for the extinguishing control panel. Detailed and context-sensitive information about the parameterisation is thus available to the installer at the press of a button.

The Labor Strauss Group offers specific training for the Extinguishing Control Panels Series BC600/LC600. As a result, the employees in charge are constantly informed about the latest developments in order to assess risks correctly and implement technical solutions in the best possible way.

For small single-zone extinguishing systems, the compact Fire/Extinguishing Control Panel BC600-1L/LTF/EXT is ideally suited. It consists of the basic unit BC600-1L/LTF, in which the following components have already been installed at the factory: 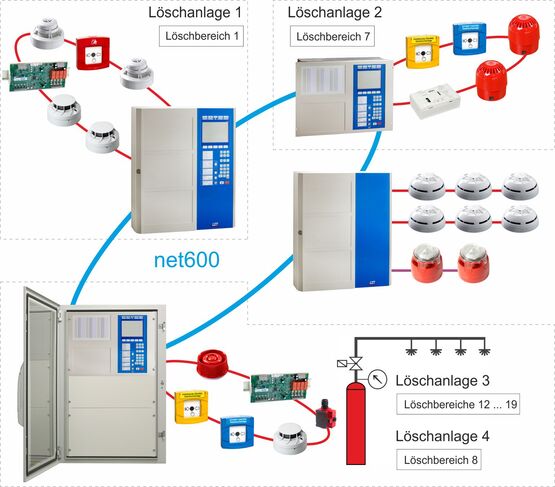